Saying Goodbye to an Icon for Women's Rights

Saying Goodbye to an Icon for Women's Rights 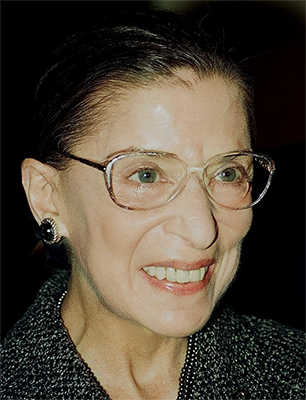 “The right to family planning is inherent in the right of human dignity.” This quote is announced, articulated, and pronounced in the UN Charter and further reiterated in all international and regional human rights agreements.

This week we mourn the passing of one of the most iconic figures dedicated to equal rights. Ruth Bader Ginsburg, though tiny in stature was a giant among those who paved the way and laid the foundation for equality and not just for women.

Family planning is not only a matter of human rights; it is also central to women’s emancipation, decreasing poverty, and achieving forward movement and development.

Early in her career, arguing before the very court on which she would eventually sit, she told the justices that she asked for no favor for her sex – only that men “take their feet off our necks,” quoting abolitionist Sarah Grimké.

The “notorious RBG” as she was affectionately known to many, is often recognized as a champion for women but she saw that gender equality was beneficial not just for women but for everyone; men, women and, families.

So much of who Justice Ginsburg was is encompassed by her creation of foundational principles matching cultural movements to the law – laws that often were not adequate for our times. Our reproductive rights and laws need to continue to be updated as do our institutions so we can match today's conversations, needs, and family-planning to the laws that protect privacy and personal choice.

Most people think of the Roe V. Wade case as a choice to terminate an unplanned pregnancy, but that decision comprises many more complicated and complex ramifications for family-planning then just “a woman’s right to choose”.

Family-planning in its least demanding form is an extremely personal decision. It’s about when to get pregnant and how many children one might plan for, whether you have the resources to support the child and care for it. Planning a family for some is also about the “how” we conceive. Having a child involves intimacy. Whether that be with a partner or singly, and it’s a private and personal decision dependent on many factors known often only to the parties involved.

Over almost two decades, I‘ve had the pleasure of coaching and supporting, family-building with those who struggle through reproductive treatment and failure; the sorrow-filled experiences of multiple losses, of stillbirth, genetic challenges, and more. This is personal to me, having survived 7 years of infertility and 4 pregnancy losses myself.

In July of 1978, Louise Brown was born in Oldham, England. This event was the beginning of IVF (in vitro fertilization) where doctors extract eggs from the ovaries and mix them with sperm in a petri dish or tube to create an embryo. Once the embryo begins to grow, doctors transfer it to the uterus.

Reproductive research pioneers Robert Edwards and Patrick Steptoe were initially criticized but today IVF is the most important method for the treatment of infertility. In 2010 the Nobel Prize in Medicine was awarded to Robert Edwards for the development of in vitro fertilization. In 2018, more than 80,000 babies were born from IVF procedures in the United States alone and more than a million around the world.

The Present Condition of Reproductive Equality

A large void in the fight for human rights now exists in the passing of Justice Ginsburg. As far as reproductive rights go, more than 60% of polled Americans support choice. It would be unconscionable and totally unacceptable to make an appointment to the court that could shift it away from choice when voting has already started in many states and the majority of the population supports privacy and choice.

The Supreme Court hears and decides cases that have broad and sweeping legal, political, and social significance. The opinions issued by the Court will have a substantive impact on society, but more importantly on every one of us - personally.

The right to choose IVF to plan your family in on the ballot alongside healthcare including pre-existing conditions. A shift in the court here could leave millions of people without healthcare during a pandemic.

If there was ever any hope of getting IVF covered by insurance, this could make all the efforts of many reproductive rights organization null and void.

Whether survivors of sexual violence can get the services they need is on the ballot.

Equality is on the ballot. So much is at stake.

Ruth Bader Ginsburg is a struggled as a young attorney and new mother. She faced many obstacles and laid ground-breaking legal precedence in her fight for equal rights changing the way the courts view gender discrimination.

Please visit INCIID.org for more information on infertility and support for those who struggle with treatment.